North Carolina is home to the world's largest zoo, with 2,600 acres, large natural habitats and more than 1,700 animals in its care. The show features several Zoo staff, including keepers and veterinarians, during routine animal husbandry, emergency procedures and the Zoo’s work in conservation and rescue and release of injured wildlife. Follow the Zoo online Facebook, Twitter, Instagram @nczoo.

Jb (jay-bee; yes, it’s the correct spelling!), MS, DVM, Dipl. ACZM serves as the Director of Animal Health and Chief Veterinarian for the North Carolina Zoo. In his role, he oversees the health and well-being of more than 1,700 animals that call the Zoo home.  Jb also leads the Zoo’s veterinary hospital with a staff of nine and the Zoo’s Wildlife Rehabilitation Center, one of the few wildlife rehabilitation centers operated by a zoo in the country. He has worked at the zoo since 2014 (plus an earlier stint here as a vet resident) and was previously staff veterinarian at the Great Plains Zoo in Sioux Falls, South Dakota.

Jb’s hometown is Portsmouth, Virginia. He is involved in several conservation projects both locally and internationally including efforts with elephants in Cote d’Ivoire, Africa. You can read more about his work with elephants on the Zoo’s blog. Follow Jb at the Zoo on Instagram @dr.jbminterdvm 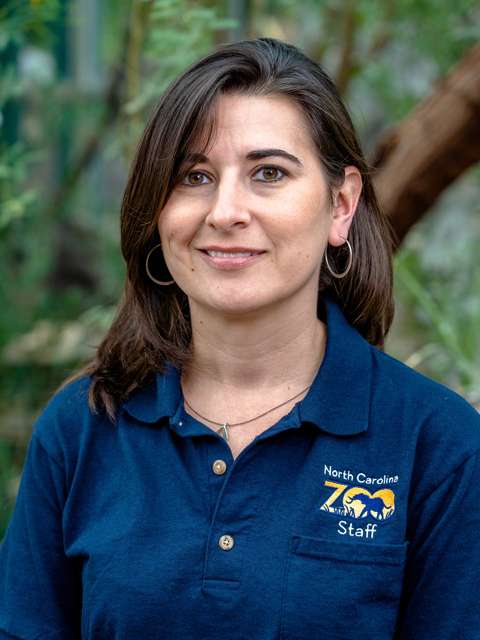 Heather serves as the Hospital Manager, Head Veterinary Technician and Jb’s right-hand person for the Zoo’s veterinary team. In her role, she helps manage the vet techs and hospital staff. She works with ALL the Zoo animals! Heather has a Bachelor’s in Animal Science from Clemson University and is a Registered Veterinary Technician, Veterinary Specialist (Zoos). Heather has worked at the North Carolina Zoo for 14+ years and her hometown is Greenville, South Carolina. Read about Heather's work with endangered birds on the Mariana Islands on the Zoo's blog. 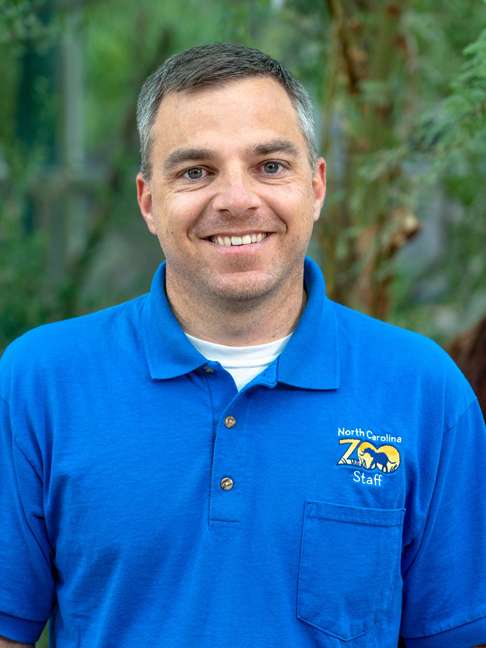 As the curator of herpetology, Dustin works with reptiles, amphibians, fish, & invertebrates and oversees the Zoo’s Cypress Swamp, Streamside and Desert habitats. He received his Bachelor’s of Arts at the University of South Florida. Dustin has worked at the North Carolina Zoo for 7+ years and his hometown is Miami, Florida. With more than 20 years of experience working in zoos, he is also involved with several conservation efforts both locally and internationally to help save species, including the Appalachian Hellbender and the elusive and rare silver boa. Dustin is also a talented photographer and snapped great images of the Zoo's indigo snakes hatching and the Zoo's sand cat kitten. 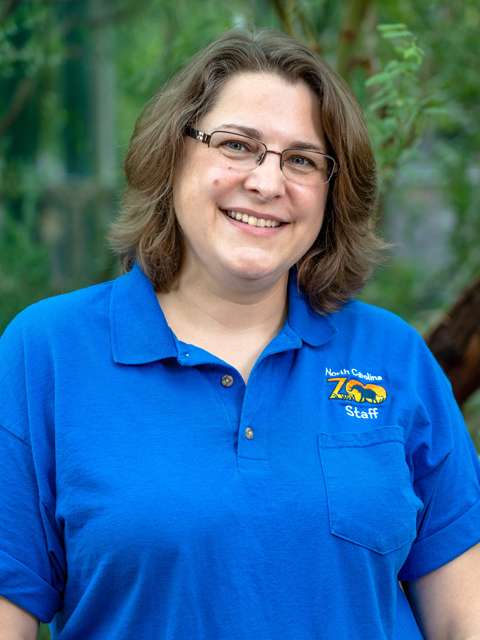 As the curator of mammals, Jenn oversees the care for many of the Zoo's iconic animals: primates, big and small cats, marine mammals, giraffes and many others! She manages animals and staff in the Zoo’s Rocky Coast (polar bears and seals) Forest Glade (Gorillas), Kitera Forest (Chimps), ZOG (Zebra, Ostrich, Giraffe) habitats. She received her Bachelor’s of Arts from State University at New York College at Oswego. Jenn has worked at the North Carolina Zoo for 23+ years and her hometown is Bath, New York. Under Jenn's leadership, the Zoo is recognized as a leader in chimpanzee management in the zoo community and was one of the first to pioneer the use of fission-fusion social management. Read more about her work with chimp management and the challenging integration of Chimp Kendall. 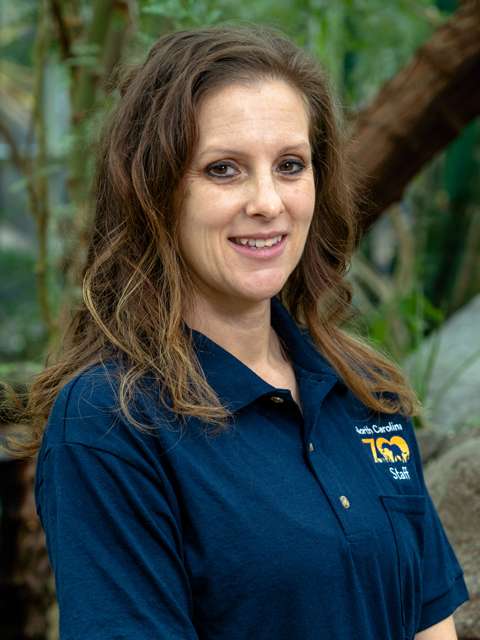 Sally is the Animal Supervisor for the Zoo’s Rocky Coast habitats.  In her role, she works with all the “chill” animals:  polar bears, seals, arctic foxes and sea birds. Sally has Bachelor’s of Science in Psychology from the Florida Institute of Technology. Sally has worked at the North Carolina Zoo for 7+ years and her hometown is Hillsville, Virginia. It's a Zoo Life for Carroll County Native 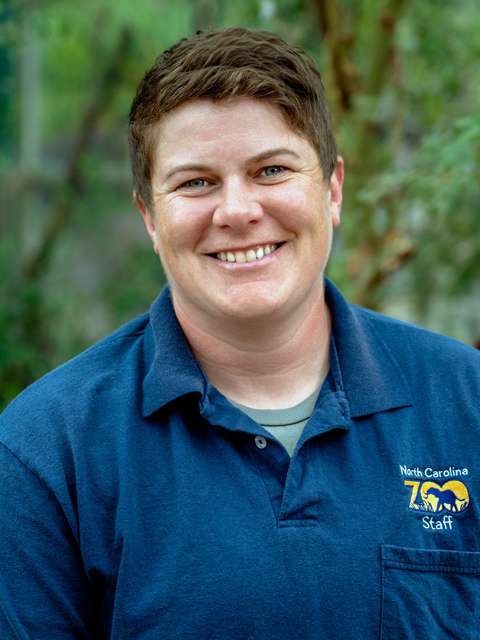 Nancy is the Animal Supervisor for our African elephants, a big job! In her role, she manages the keeper elephant team and six African elephants, all with big personalities. She has a Bachelor’s of Science in Animal Biotechnology and Conservation Wildlife Management from Delaware Valley University. Nancy has worked at the North Carolina Zoo for 4+ years and her hometown is Camp Hill, Pennsylvania. Read the Zoo's blog about Nancy's special touch with an elephant-sized pedicure. 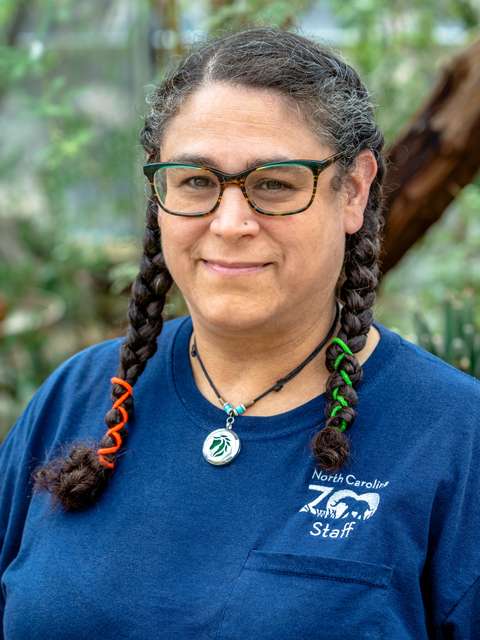 When wildlife is in trouble, Halley is to the rescue. Halley manages the Zoo's Valerie Schindler Wildlife Rehabilitation Center (WRC), the only center of its kind in U.S. zoos. WRC intakes and cares for sick, injured and orphaned native North Carolina animals for the sole purpose of returning them to the wild. At any one time, Halley and the WRC's dedicated staff of interns and volunteers could be caring for orphaned black bear cubs, orphaned river otters, rabbits, squirrels, birds and even orphaned bobcat kits and bald eagles. Halley has worked at the Zoo for more than 13 years and has a Bachelor of Science in Biology, is a Certified Veterinary Technician,  a Certified Wildlife Rehabilitator and a Master Bird Bander. 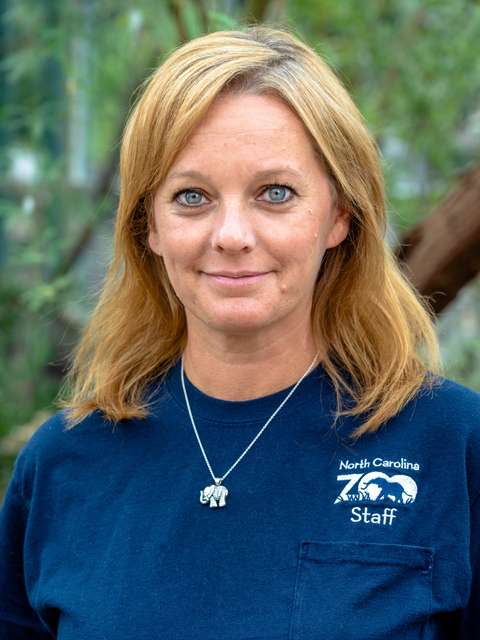 Kim is a keeper in the Desert habitat, which includes working with some of the smaller, but mighty, animals such as sand cats, vampire bats, ocelots and one very special porcupine. She has a Bachelor’s of Psychology from Ohio State University. Kim has worked at the zoo for 12+ years and her hometown is Akron, Ohio. 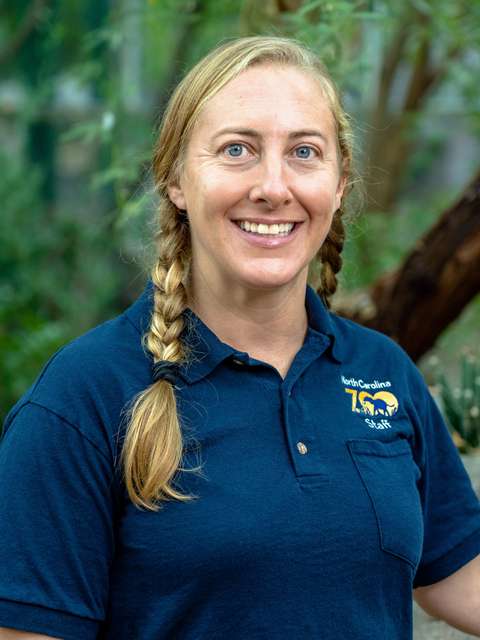 Audrey is a keeper at the Zoo’s Cypress Swamp habitat. In her role, she works with the Zoo’s reptile and amphibians, including her favorite, the threatened and federally protected Eastern Indigo snake. She has a Bachelor’s of Biology and Chemistry Minor from UNC Chapel Hill and a degree in Animal Technology from Santa Fe Teaching Zoo in Gainesville, Florida. She has worked at the North Carolina Zoo for 6+ years and her hometown is Mocksville, North Carolina. Read more about Audrey’s work with Eastern Indigo snakes. 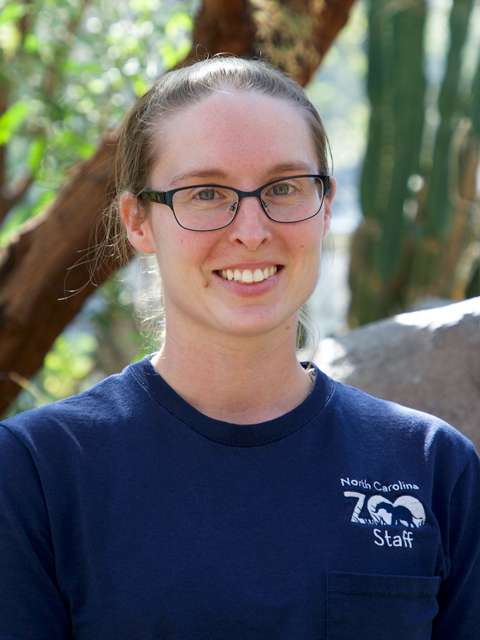 Kelly is a keeper for the Zoo's "ZOG" habitats: zebra, ostrich, giraffes and red river hogs. She has a Bachelor's of Arts from Appalachian State University (Boone, NC) and an Associate’s Degree in Zoo Science from Davidson Community College. She has worked at the Zoo for 7+ years and started by working in our exhibit design and education departments. Her hometown is Midway, N.C. Working with the Zoo's tallest animals can be interesting and you can read about her work with our Tower (group of giraffes) here on the Zoo's blog. 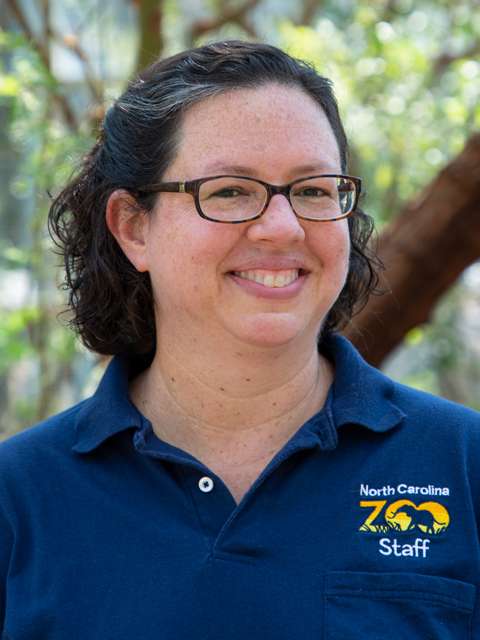 Jenni is a zookeeper for the chimps, lions and lemurs. She has a Bachelor's Degree in Biology from the University of Virginia. Jenni has worked at the zoo for 15+ years and has longtime relationships with the chimps and watched Reilly the male lion age into a distinguished (and sometimes cranky) old man. A "navy brat" that has lived all over, her family is from Pendleton County, West Virginia. Read more about her experience encouraging mating between Reilly and female lion Mekita by forming a love triangle which involved poop. Also about Jenni's love of her favorite chimp: Nori 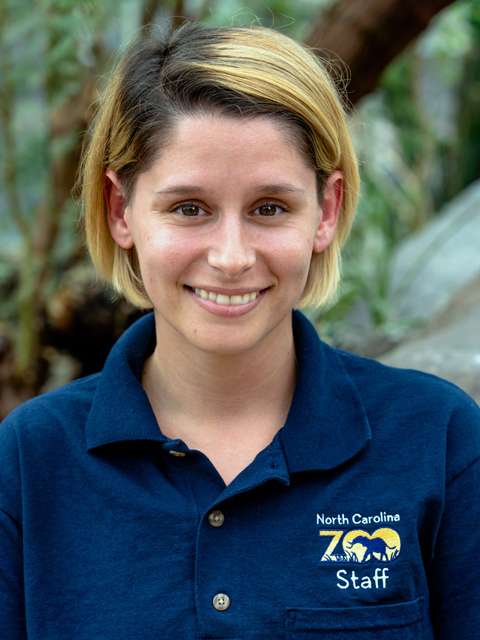 Kristy is a keeper for the zoo’s chimps, lions and lemurs. She has an Associate’s Degree in Zoo Science from Davidson Community College. Kristy’s hometown is Troy, North Carolina which is right up the road, so she grew up visiting the North Carolina Zoo. She has worked at the zoo for 4+years.

Catch up on the series with these video clips!