The North Carolina Zoo welcomes its newest resident, a 1,000-pound male polar bear, as part of its breeding efforts. The Zoo is hopeful the addition to the polar bear family will result in new offspring.

Payton, 17, is being relocated from the Memphis Zoo in Tennessee on the recommendation of the Association of Zoos and Aquariums’ (AZA) Species Survival Plan (SSP).

After Payton gets a clean bill of health from veterinarians, he will be introduced to Anana, the Zoo’s female polar bear. The polar bear breeding season typically lasts from February to April.

Payton is replacing Nikita, the Zoo's male polar bear who arrived in 2016 but did not produce a cub with Anana after five breeding seasons. Nikita, 15, will be moved to Utah's Hogle Zoo in Salt Lake City. The AZA uses a science-based approach to matching bears under human care in an attempt to foster more cub births. In 2008, the polar bear became the first species to be listed under the Endangered Species Act as threatened primarily due to climate change.

Currently, Payton is settling into his new quarters at the Zoo and is scheduled to meet Anana the second week of February – right around Valentine's Day. Anana, 22, was born at the Seneca Park Zoo in Rochester, NY, and arrived at the North Carolina Zoo in September 2014.

“Polar bear populations are declining, and zoos have a significant role in protecting the future of this vulnerable species," said Jennifer Ireland, curator of mammals for the North Carolina Zoo. “When people see and learn more about polar bears and the effects of climate change in the Arctic, it brings awareness of their plight in the wild."

Payton, named after Walter Payton – the late running back for the Chicago Bears NFL team – was born Nov. 8, 2003, at the Brookfield Zoo in Chicago. Payton moved to the Memphis Zoo in 2006 as a mate for Haley. That pair also did not produce a cub.

“Seeing Payton leave is bittersweet. He has been a part of our lives at Memphis Zoo for the last 15 years,” said Amanda Moses, communications specialist for the Memphis Zoo. “He is special to Memphis Zoo, and to the keepers and researchers who have worked with him. Moving Payton was not only the best option for him, but also for the re-population of the polar bear species.”

His arrival at the North Carolina Zoo also marks a reunion for Payton and North Carolina zookeeper Karen Warda. She was one of Payton's keepers at the Memphis Zoo from 2009 to 2016. Warda will be Payton’s primary keeper for the first two weeks as he gets acclimated to his new digs.

Polar bears, which are native to North America, are listed as vulnerable on the International Union for Conservation of Nature Red List of Threatened Species. There are an estimated 22,000-31,000 in the wild and polar bear numbers are projected to decline by 30% by 2050.

Polar bears are at the top of the food chain, or the apex predator, in the Arctic. The only threats to polar bears are humans, other polar bears and climate change as the species struggles to survive.

Polar bears are dependent on the sea ice, which is hunting grounds for their primary prey – seals. With less sea ice each season, polar bears are left with a shortened hunting season and less food for survival.

In the wild, polar bears live an average of 15 to 18 years, although biologists have tagged a few bears in their early 30s. Under human care, bears can reach their mid-30s.

The North Carolina Zoo is among an elite group of 40 zoos, aquariums, and museums that are Arctic Ambassador Centers (AAC) through a partnership with Polar Bears International (PBI). PBI is the leading polar bear conservation group in the world that works to conserve polar bears. 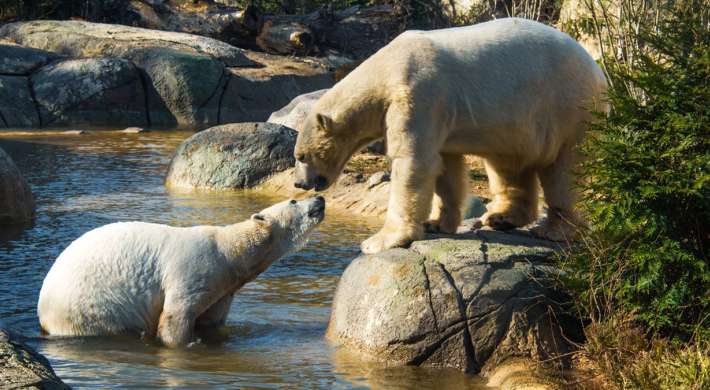