Across Africa, rhinoceros populations are declining due to poaching for their horns, primarily to supply traditional medicine markets in Asia. This poaching has driven the western black rhino to extinction, while only two northern white rhinos remain. If the threat of poaching is not reversed, rhinos in Africa will go extinct in the near future.

Northern Namibia, and specifically Etosha National Park, is home to the largest black rhino population in the world; this area also supports a large population of southern white rhinos, elephants, lions, leopards, and other species targeted by poachers. The Kunene Region of northwestern Namibia is also home to the last free-roaming population of the desert-adapted black rhino, which is conserved largely through the efforts of local community conservancies.

The Zoo works with several partners in national parks and community conservancies in Namibia to implement an anti-poaching program based on SMART conservation software that the Zoo helped develop. Using SMART, both government and community ranger patrols are now collecting field observations on rugged smartphones, which allows information to be quickly analyzed and conservation strategies to be improved to better protect wildlife. This work began initially in Etosha National Park and the Kunene region, but based on the success of these initial deployments, the Zoo and its partners have expanded efforts to include all of the national parks in northeastern Namibia: Bwabwata, Khaudum, Mangetti, Mudumu, and Nkasa Rupara National Parks.

We look forward to continuing to build on these exciting and impactful partnerships through further capacity building efforts and long-term technical and logistical support, and we aim to work with our partners to further expand SMART use to more of Namibia’s national parks in the future.

Each year, the North Carolina Chapter for the American Association for Zookeepers (NC AAZK) hosts Bowling for Rhinos (BRF). This event, which is held at selected locations across North America, raises funds in support of the Lewa Wildlife Conservancy, International Rhino Foundation, and Action for Cheetahs in Kenya. Through BFR, the NC AAZK has already raised over $180,000 since BFR started in 1990, while chapters like ours across the nation have collectively raised over $8 million!

As a partner of the Association of Zoos and Aquarium’s southern white rhinoceros Species Survival Plan (SSP), the North Carolina Zoo cares for several southern white rhinos to help ensure the population sustainability of this species under human care. The purpose of SSPs is to coordinate activities among partner institutions to maintain a healthy, genetically diverse, and demographically varied population under human care. Consequently, the breeding of rhinos living at the North Carolina Zoo were cooperatively managed by SSP partner institutions, and any future transfers of these animals will be done to ensure they maximize their contribution to the sustainability of this species under human care.

Did you know rhinos can reach speeds of 30 mph for short bursts? Learn more about southern white rhinos. 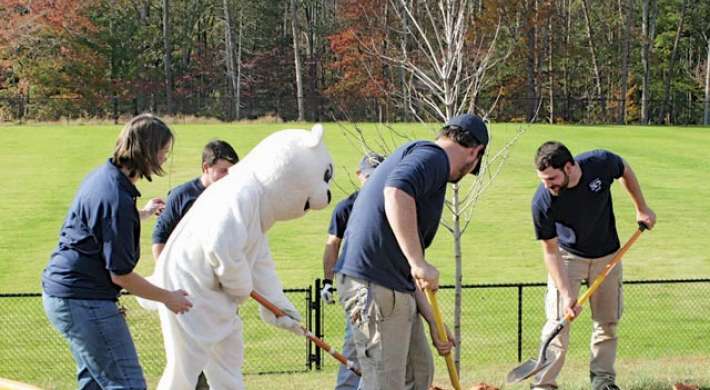 Zookeepers and other staff at North Carolina Zoo participate in several important initiatives to help save the wild cousins of the animals that live here at the Zoo.