In our last blog post about the Ngogo Chimpanzee Project, we learned how the North Carolina Zoo helps protect chimpanzees and other animals in Kibale National Park, Uganda, by funding snare removal patrols. Today one of the Ngogo Chimpanzee Project researchers, Dr. Aaron Sandel, from the University of Texas at Austin, will tell the story of an intervention to remove a chimpanzee's snare.

Veterinarians Peter Apell and Caroline Asiimwe left the hotel parking lot in Fort Portal, Uganda. It was early morning, and the silver pickup truck was packed with their equipment, ready for the task ahead. As they left the parking lot, the security guard wished them good luck. "It was rather strange," remarked Apell. "What he meant, I think, was 'Have a good day,' but in English, he said, 'Good luck.' But I took it. I needed that luck."

Dr. Apell and Dr. Asiimwe are veterinarians of the Jane Goodall Institute. They collaborate with the Uganda Wildlife Authority and the Ngogo Chimpanzee Project to provide health care for wild apes. The Uganda Wildlife Authority called Apell and Asiimwe to remove a snare on a wild chimpanzee in the center of Kibale National Park in western Uganda. To conduct such a procedure requires anesthetizing the chimpanzee with a dart from a pressurized blowgun. Finding the right opportunity to take a shot is difficult, especially when other chimpanzees are nearby. Then there is the matter of finding the chimpanzee, who may climb a tree or take off at a run through the vegetation before the sedatives take effect. Finally, there is the surgery, which must be done quickly. "There are so many things that can go wrong," Apell said. "But the number one rule is that the risk of the intervention must not surpass the risk of the snare."

Although Kibale National Park is a protected area, patrolled by the Uganda Wildlife Authority, and inhabited by numerous researchers studying animal behavior and forest ecology, illegal hunting persists. Poachers sneak into the forest to set wire and rope snares to catch forest antelope, pigs, buffalo, and elephant. Poachers also use dogs, spears, nets, and guns to catch and kill these animals. But the snares are especially dangerous, as any animal passerby can get caught, including chimpanzees. Chimpanzees lose fingers, hands, and feet from these snares, and can even die. Thus, while chimpanzees are not hunted in Uganda, poaching remains a threat to them and other endangered species.

Apell was one of Uganda's first wildlife veterinarians. He began vet school in 1994. "I was hooked on wildlife medicine," said Apell. But upon graduating, there were no jobs for wildlife vets. After getting his degree, he spent time in rural Uganda, treating cattle and getting paid in chickens and goats. Then, in 2001, he got a job as a veterinarian for the Jane Goodall Institute, Uganda. There he developed protocols for captive chimpanzee health and husbandry, spending months shadowing zoo vets throughout Europe, and continuing to learn and practice in Uganda. 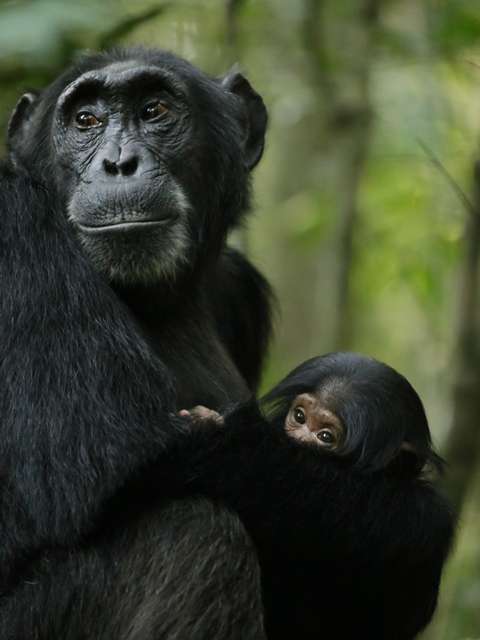 As Veterinarian and Programs Manager for the Jane Goodall Institute-Uganda, Apell developed protocols for anesthetizing captive chimpanzees that were so successful that it became possible to consider darting wild apes.

"For a long time, we thought that there was no chance for intervening with wild chimpanzees," said Apell. But since 2007, under the direction of the Uganda Wildlife Authority, Apell and his colleagues have darted approximately 30 wild chimpanzees who had human-inflicted injuries, such as snares.

Now, nearly twenty years after starting in wildlife medicine, Apell is retiring to make room for other up-and-coming vets. "This is as far as I think I can carry it," said Apell. "There is a more brilliant team of young vets breathing down my neck."

That includes Dr. Caroline Asiimwe, who was one of three women wildlife veterinarians in Uganda at the time of this intervention.

At the beginning of vet school, she questioned whether she was in the right profession. Then they started learning about wildlife medicine. "I saw these apes that look like humans," recalls Asiimwe, "the way they were being snared …that's when my passion started."

A snare is what brought Asiimwe along with Apell, and a third vet, Dr. Timothy Mugabe, to the Ngogo Chimpanzee Research Camp in the middle of Kibale Forest in early May 2015.

For as long as researchers at Ngogo have known him—some fifteen years—Garrett, a 26-year-old male chimpanzee, has had a rope snare tightly wound around his hand. But Garrett was a shy adolescent, and it was not until recently that he became comfortable with researchers following him. Now it was possible to try and remove the snare, which had caused an open infection for his entire adult life.

For the past few years, the Uganda Wildlife Authority had discussed the possibility of removing the snare. In many respects, the damage was done: Garrett is one of the smallest adults, and his hand, with the snare cutting across his palm and fingers, is forever damaged. But with the snare removed, the infection could be stopped, and it might improve his chances of survival and experiencing a more normal, healthy life. It was worth a try.

Hillary Agaba, the Uganda Wildlife Authority's Warden of Ecological Monitoring and Research in the Kibale Conservation Area, organized the mission. He called the wildlife vets, and once a tentative date was set, the researchers followed Garrett from sun up to sun down to keep track of him.

The first day was a failure. Garrett was nowhere to be found. Clouds thickened, and as the vets went over their procedures and organized their equipment, it began to pour. Researchers, including myself, crisscrossed swamps, following other chimps, and trying to find those likely to associate with Garrett.

Agaba and the vet team returned to Fort Portal for the evening. We would call them when we found Garrett.

The next day was more auspicious. The clouds scattered across the sky; no rain. By late morning, we found Garrett.

The vets arrived, and by 2 p.m. reached the forest. Garrett fed at the top of a large Pterygota tree, the brown fruits the size of fists occasionally dropping to the forest floor with a thud. Their white petals fluttered to the ground like miniature paper airplanes.

Garrett climbed through the canopy from tree to tree, refusing to come down. It was getting late, too late to try and dart. Asiimwe, who was the primary vet for this intervention, sat with researchers under Garrett, hoping he would get used to her for the next day. Dr. Kevin Langergraber, the co-director of the Ngogo Chimpanzee Project, and I stayed with Garrett until the sun began to set. He finally came down, made a quick rush 100 feet to another tree, and then climbed up, bending branches to build his nest for the night.

The next day, the sky still dark and the birds not yet whistling their morning tunes, Langergraber and I were up to find Garrett before he left his nest. The vets joined us in the forest. Apell and Asiimwe waited under the tree Garrett was feeding in. I stayed 150 feet away with a tarp in case it was needed to catch him. Others waited farther away, forming a perimeter in case Garrett ran after being darted.

The ideal time to dart is when the chimpanzee is climbing down from a tree, the vets told us. Darting when the chimp is still up in the tree is riskier, as the chimp could fall.

But after hours of waiting, it seemed Garrett would never come down. He fed on the red fruits of Uvariopsis, a relatively small tree, only 30 feet from the ground. This was their chance. The vets raised their pressurized dart guns. Asiimwe fired but missed. Apell fired the back-up dart but also missed. Garrett must have noticed something but remained in the tree. Apell calmly re-loaded the dart gun, took aim and hit the target, Garret's thigh. Garrett jolted, then made an unexpected leap and climbed up an adjacent tree.

I ran with the tarp and hooted like an owl, our standard forest communication, for back-up. The research team arrived at the scene. Garrett was now 100 feet above us. The drug usually takes effect in 5 minutes and wears off soon after 20 minutes.

Five minutes passed, then ten. Garrett's head nodded, and his lip began to droop. The vets called out the signs that the drug seemed to be taking effect and called out how many minutes had passed, aware we were running out of time before the drug wore off.

Twenty minutes. Drool fell from his lip, hitting the tarp. He leaned back, then forward. He swayed in the tree, but still held on. Time was running out. Then, Garrett keeled over; he was falling.

It seemed like slow motion, spinning in the air. Everyone tightened their grip on the tarp, then with a thud, Garrett hit the tarp and ground, rolling on his side. Still conscious, he staggered forward. Apell pulled him back on the tarp, and Asiimwe injected an additional sedative. Nodding his head, Garrett finally fell asleep.

The operation was quick. Apell cut the rope and pulled it off Garrett's wrist in seconds. He held it up, the bloody rope like a bracelet. So small, so simple, so destructive to the wellbeing of this chimpanzee. Asiimwe continued with the procedure, washing the wound. They would leave the wound open to heal naturally. Bees buzzed around them, but Asiimwe worked quickly and efficiently.

Garrett also worked quickly. Just after the vets finished, Garrett sat up. He was still under anesthesia but was fighting it off. The vets gave him a reversal drug, and we all backed away. Garrett stumbled forward and climbed the nearest tree. Eyes half-open, he looked down at us, then began to lick his wound.

Then Garrett slid down from the tree and took off at a run on the ground, quickly losing us. That also seemed to be a good sign.

The procedure was a success. I walked back with the three vets, Peter Apell, Caroline Asiimwe, and Timothy Mugabe. Everyone was content, although with the adrenaline wearing off, we were also tired and wired. Asiimwe was ready for a glass of wine, she announced.

"We already have a chimp named Peterson," I replied. "Maybe Garrett Apell."

Apell chuckled. It was the last wildlife intervention he was leading, as he is retiring to let up-and-coming vets, as he puts it, like Asiimwe and Mugabe, take over the growing field of wildlife health in Uganda.

"Garrett has been baptized," joked Mugabe.

"Baptized in saline solution," I added. 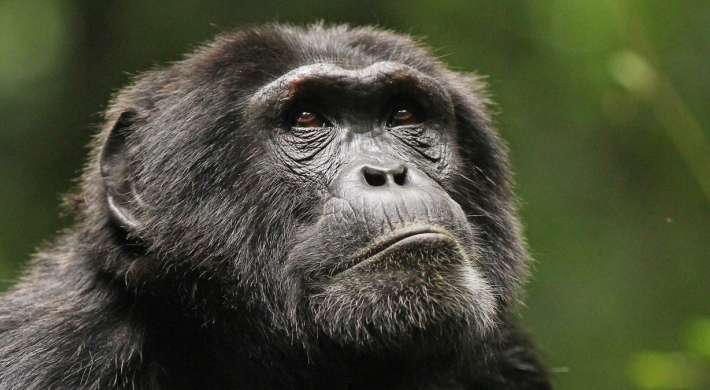 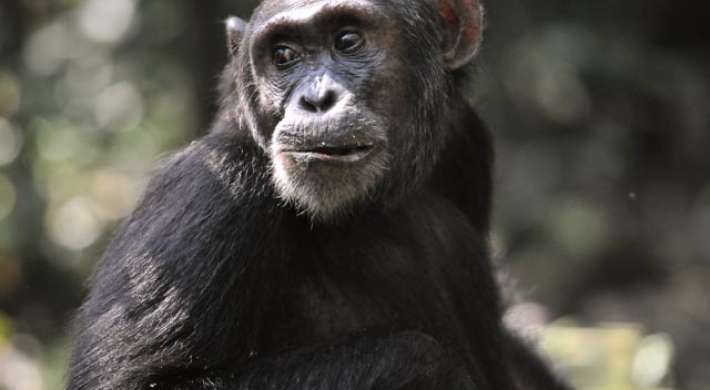