The North Carolina Zoo is an Arctic Ambassador Center (AAC), which means we work with Polar Bears International (PBI) to educate about climate change and how we, as a community, can help reduce our carbon footprint, which helps protect polar bears. But, to be honest, climate change has always been a scary topic for me to discuss. I only knew so much and let the mere idea of conflict keep me from educating on it…or at least using the actual phrase “climate change.” I knew it was something I needed to work on.  As an educator at a Zoo that houses polar bears, it was imperative I knew how to inspire people to protect them and their natural habitat. 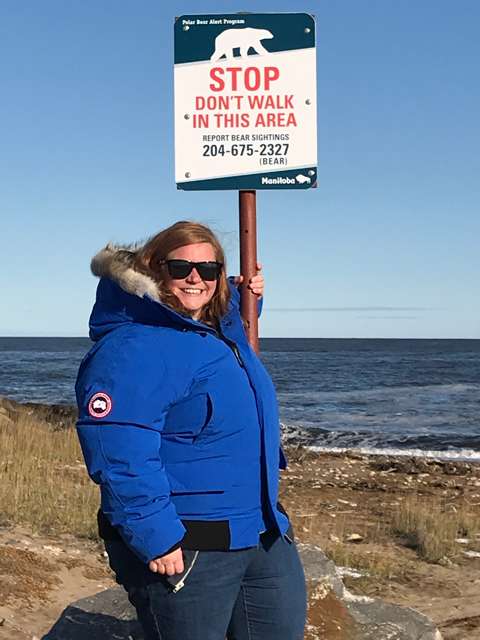 Last February, I was chosen to partake in the Climate Alliance through PBI to tackle this exact professional development. For six months, we learned all about climate science and how it relates to polar bears and their habitat. This amazing program culminated in a once-a-lifetime trip to Churchill, Manitoba, Canada, at the beginning of October.

Approaching the lodge on the tundra - best viewing for polar bears!

I remember the exact moment I saw a wild polar bear. After days of mistaking rocks for bears, we had finally given up and started back to our lodge when suddenly another participant yelled: “BEAR! BEAR! STOP! BEAR!” As we all crammed to one side of the tundra buggy, holding our breath, there it was. She slowly ambled along, nose up in the air, able to smell us with her keen sense of smell. For those 10 minutes before she disappeared, the buggy was completely silent. Tears rolled down several people’s faces as we knew why we were there and how important it was to help keep the arctic safe.

Polar bears are ice fishers with paws covered in fur to let them walk on ice, massive jaws, and hollow hair to help them stay buoyant when they swim. All of these adaptations are necessary to hunt for seals. Maintaining their blubber layer in such an extremely cold environment is imperative to survival. Catching seals is no ordinary feat, and polar bears need thick chunks of ice (called ice floes) to set them up for success.

The Zoos polar bears have access to two habitats - a Tundra-replicate and Arctic Waters, a 147,000 gallon pool chilled year-round.

To power our lives, we burn fossil fuels such as coal, oil, and natural gas, releasing carbon dioxide into the atmosphere. The atmosphere then absorbs the carbon dioxide, thickening it, and acts as a heat-trapping blanket around the world. The trapped heat has nowhere to go but back to the earth, warming it and disrupting climate systems. This is happening two times faster in the arctic, causing sea ice to form later, thinner, and in fewer places.

While this can seem scary, we know just what to do to help. There are many already existing solutions to lower our carbon emissions, and a great resource to start is https://climateinterpreter.org/resources.

Most Americans know climate change is real and is a force to be reckoned with, but 65% of those Americans are too nervous to admit it. The biggest solution to this problem is to talk about it. So let’s talk about it.