Are you an introvert or extrovert? Are you happiest when in a large group of people or one-on-one with a good friend? Do you enjoy your time with both your male and female friends similarly, or do you just prefer to spend time with women? Non-human animals have similar social preferences – they may enjoy certain individuals or groups better than others.

Female African elephants live in multi-generational, cohesive herds, ranging from four to 100 individuals, whereas males often form loosely associated bachelor groups or travel alone. Females spend their lives socializing with other females, and while social interactions between adult males and females are limited, they do occur and may play some role in an individual’s daily well-being.

Here at the North Carolina Zoo, we try to offer a similar level of social complexity for our African elephants. The Zoo houses six elephants: four females (Batir, Tonga, Rafiki, and Nekhanda) and two males (Artie and C'sar). The females maintain permanent “mini-herds” in pairs: Tonga and Batir (mother and daughter) and Rafiki and Nekhanda (who are bonded). So, just like in the wild, our females are always with a certain individual. We also try to facilitate variation in who the elephants socialize with, such that individuals come into contact with others, beyond their core group, as would occur in the wild. We can achieve this by rotating access of the female pairs to one another, as well as their access to the males, all of which provides a more complex herd structure.

But not all African elephants are the same. Individuals within our herd also have individual preferences in how they socialize and who they socialize with. So how do we determine what the optimal group structure is, for each individual elephant?

As I have discussed in my previous blogs, the Zoo uses scientific research as a tool to improve animal welfare. In this case, we were interested in observing how an individual’s daily behaviors and activities change in different social groupings.

Over the last few years, we have had two North Carolina State University students, Katherine Kastl and Meredith Jessup, conducts studies to see if the elephants’ activities and behaviors changed when in different social groupings. The elephants’ day-to-day social group could vary as follows: a female pair with one male; all four females together with no male; all four females together with one male; and a male alone. The students watched and recorded the behaviors of all the elephants from 9am to 5pm, for hour long intervals, for all possible social groupings.

Katherine and Meredith’s studies came to two important conclusions. First, the females exhibited more desirable behaviors, such as foraging and exploring the habitat, when both female pairs were together. This research highlights the importance of facilitating a large, herd-like structure for zoo-housed female elephants. Nekhanda and Batir, for example, while not part of each others’ core social group, still enjoy spending time together.

Below: Batir (left) and Nekhanda (right) foraging together

Second, the males also benefited from the presence of a larger number of females! Both Artie and C'sar engaged in more positive behaviors when grouped with both pairs of females.

Below: Artie behind Tonga, playing together

Below: Batir (Left) and C'sar (right) walking together

Our study helped demonstrate the importance of socialization, even for male (or bull) elephants, who are often thought to be more solitary.

Integrating the herds and creating social complexity; what an elephant-astic idea! 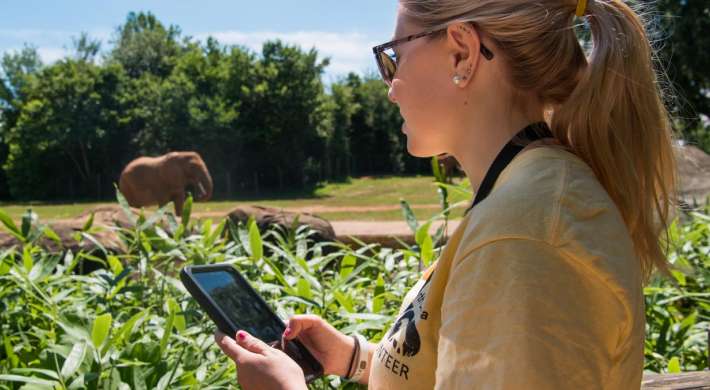 Seeing the Elephants through the Trees

Every species, and often even each individual, has unique requirements, and research plays a big role as part of our constant effort for improving their well-being.

Did you know elephant babies can weigh over 200 pounds at birth? Learn more about African elephants.