Spend Some Time in Purgatory: Exploring the Zoo’s Purgatory Mountain

The North Carolina Zoo is committed to protecting native wildlife and their natural habitats, right here in North Carolina. We preserve over 2,000 acres of undeveloped land near the Zoo and are actively working to manage and restore these lands. These protected areas provide excellent habitat for many plants and animals and provide important corridors that allow animals to move safely through the landscape.

One of the highlights of our natural areas is Purgatory Mountain, a low, flat mountain at the northern edge of the Uwharrie range that is adjacent to the Zoo. Although the Uwharries are some of the oldest mountains in the world, Purgatory Mountain did not get its name until at least the Civil War. Some believe the mountain was named by war objectors hiding out there, while others attribute the moniker to the abundance of small fires dotting the hillside during bootlegging operations.

Today, Purgatory Mountain no longer harbors war objectors or bootleggers, but it is home to many species of plants, animals, and fungi. This diversity is enhanced by several unique features, such as an upland pool and a low-elevation seep. These are two types of uncommon wetlands that dry seasonally and support unique plants and amphibians, such as spotted salamanders, cricket frogs, spring peepers, and gray treefrogs. Trail cameras deployed by Zoo biologists have captured larger animals in the area, including racoons, Virginia opossums, white-tailed deer, bobcats, and gray foxes. Many snakes, such as copperheads, black racers, and eastern hognose snakes, also can be found basking in sunny spots.

Pictured Above: The eastern hognose snake is one of many species that call Purgatory Mountain home.

Purgatory Mountain also provides important habitat for several rare species, such as the timber rattlesnake, a species of special concern in North Carolina. There is also a managed restoration site for the federally endangered Schweinitz’s sunflower. Historically, this small yellow sunflower occurred in Piedmont prairies maintained by fire, and it is threatened by habitat loss and degradation. Zoo staff use prescribed fire to maintain a small opening in the forest to provide optimal conditions for the sunflowers.

Purgatory Mountain is open to the public and accessible through over four miles of foot trails. Zoo admission is not required to access the trails. The trailhead can be found at the north end of the North America parking lot. From there, you can take the Purgatory Trail and reach the summit (935 feet) in one mile, or you can explore three other trails. After experiencing the scenic beauty and rich diversity of the area, Purgatory Mountain will seem more like heaven! 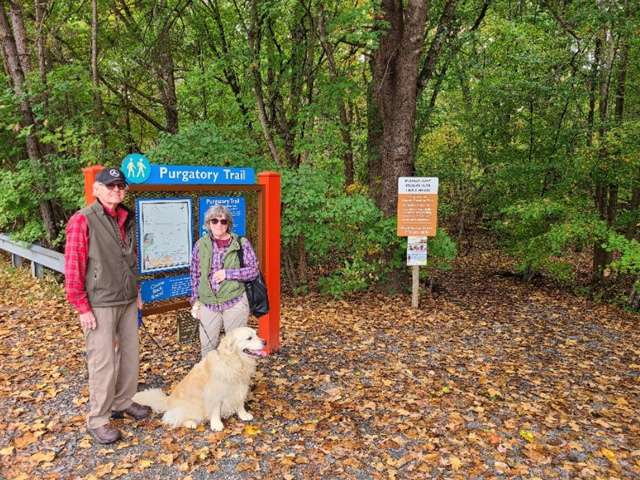 Hikers about to set out on a trail to explore Purgatory Mountain.

The North Carolina Zoo invites its guests to venture down one of our many hiking trails. 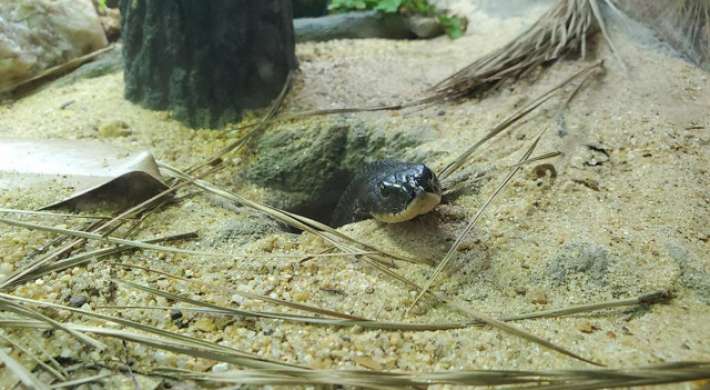 Next time you encounter a snake in your yard, just consider it another neighbor!