Plug-in to Help the Environment

"Drive Electric." This phrase has been a part of the common American vocabulary for about 20 years.

Electric vehicles, or "plug-ins," as we have begun to call them, represent something very different than the gasoline-powered vehicles we've all driven for years.

Automobiles have only been a part of the American way of life for slightly over 140 years.  Before the 1960s, there were abundant forms of public transit, such as buses and trains, for travel. Larger cities still use mass transit to move people around.

Not many people think about how vehicles are fueled until the fuel indicator begins to approach "E." Some subway systems (including the Washington DC Metro system) are fully electric.  As a child, my mother moved about Wilmington, NC, on buses and an electric Trolley Car system, similar to those found in New Orleans and San Francisco.  Back then, it was possible to catch the trolley from downtown Wilmington out to Wrightsville Beach.

Wilmington, as an example, made the switch to diesel-powered buses about 1940, as did many municipalities across the country.  This transition enabled public transit to be more independent and diverge away from only using established electric routes.

Why even consider electric vehicles?  They are limited by power sources, either requiring a corded connection, a friction connection to cables and rails that supply electricity, or a battery.  We know batteries need charging, and this typically takes longer than simply pulling up to the pump and adding a few gallons.

One reason is efficiency.
A standard gasoline-powered automobile only converts about 40% of the energy in petroleum fuel into actual mechanical energy.  Much of the inefficiency is the result of friction, and heat is produced.

Manufacturers grew creative over the years, figuring out various strategies to capture that heat to warm the passenger cabin.  In the summer, it is just wasted energy.

An electric vehicle is far more efficient, converting almost 85% of the battery energy into mechanical energy to drive the car. This means that it will require far less energy (regardless of the source) to drive the vehicle at a particular speed for a certain distance.

Engineers and designers have known this for many years.  Between standard internal combustion engines and electric vehicles (EVs) are the hybrids.

Few realize that the U.S. has relied upon hybrid vehicle technology far longer than the Toyota Prius has been in existence.  Most of the diesel locomotives are hybrid drives. The diesel motor drives a generator, which drives electric motors connected to the wheels.

Buses, too, are available as hybrids.  In Denver, CO, the buses that move up and down 16th Street through the central portion of downtown are hybrid drives. The generators can produce enough energy to drive the vehicle when at an idle or revved up slightly.  This means they use less fuel and cause less pollution.

But back to electrics.
We've used gasoline golf carts for getting around the Zoo for many years because electrics simply won't work. Battery-operated motors take a long time to charge and get slower and slower during the day. It became expensive to replace batteries.  So we happily chugged along with gasoline driving our carts.

This was the case until June of 2020.  We secured one of the newer generations of EZ-GO carts as a demonstrator vehicle.  We kept this for two months, allowing anyone who wished to drive it.  We hoped this would eliminate the stigma of those older designed carts.

People were surprised.
The new Lithium battery power lasted all day.  The carts did not develop the tendency to slow down with use.  The carts were lighter and faster than even the newest of its gasoline-powered peers.

The issue still stands about charging times and travel range, but if we revisit the history of automobiles in the United States, that too was a problem with early cars. Electric vehicles, whether used on-road or off, represent a wonderful compromise of efficiency and power.  Take the opportunity to find out how this can work for you by participating in one of the many "Drive Electric Week" celebrations happening across the country in October.

Randolph Electric Membership Cooperative (REMC) will host the local Drive Electric Event this Friday, October 1, 2021, along with the North Carolina Zoo.  The event is between 10 a.m. and Noon in the Zoo's North America Parking area.  Join us to find out how you may make the shift to driving electric! 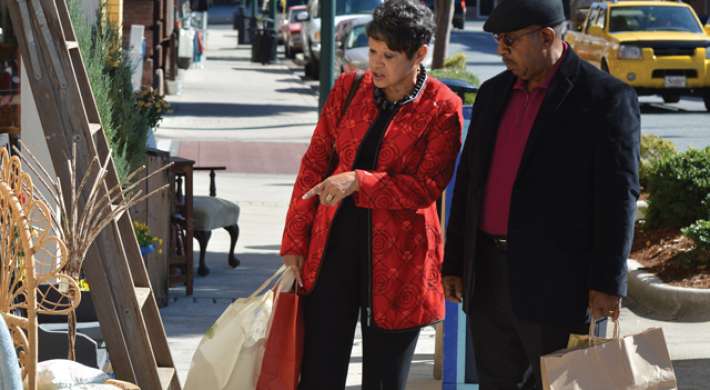 Come learn about the North Carolina Zoo's Green Practices as well as what you can do at home or school to help.