On the Frontlines: Protecting Preuss's Red Colobus Monkey in Nigeria

For most animal lovers, primates hold a special appeal for a variety of reasons, including being our closest living animal relatives, their remarkable intelligence, possessing facial features that in many cases bear resemblance to our own, their highly social nature, as well as the revered place they occupy in many human cultures.

I have heard many people make comments like, "Primates are a joy to watch!" And, that is true whether on TV or in the wild (for those lucky enough to see them in the wild). I have a few unforgettable moments myself in the rainforest of southeastern Nigeria, where I have had the privilege of seeing different species of primates feeding and moving through the canopy, thicket, and forest floor. Once I quietly observed at least four different monkey species feeding together within the same area deep inside the forest in the Oban sector of Cross River National Park. It was a truly wonderful and satisfying moment – one that increased my love of primates.

Sadly, a large percentage of the world's primates – from the large-bodied, awe-inspiring species such as gorillas, chimpanzees, bonobos, and orangutans to small-sized species such as lemurs, galagos, and lorises – is threatened with extinction by the activities of humans.

In Nigeria, Preuss's red colobus is found only in the Oban sector of Cross River National Park (Oban). Neglected and poorly protected for many years, hunting is widespread in Oban. To reduce levels of hunting and protect the Preuss's red colobus population in the park from further decline, the Wildlife Conservation Society (WCS) launched a law enforcement project in Oban in 2016, providing training, equipment, supervision and other technical support to park rangers to carry out daily anti-poaching patrols in the park. With technical support from North Carolina Zoo, the project uses the Spatial Monitoring and Reporting Tool (SMART) software to improve patrol planning, ranger performance monitoring, data collection, analysis, and reporting. As a result, patrol effectiveness has dramatically improved, and levels of hunting in Oban have gradually declined.

Continued support from North Carolina Zoo over the years has been critical to the successful implementation of SMART in Oban, helping to protect Preuss's red colobus as well as other endangered primates including the Nigeria-Cameroon chimpanzee (Pan troglodytes ellioti), drill (Mandrillus leucophaeus) and red-capped mangabey (Cercocebus torquatus). In addition to law enforcement, WCS implements an education and awareness program in local communities and schools around Oban that is building a growing constituency of supporters of primate conservation including young people (students and pupils), in whose hands the long-term conservation of Preuss's red colobus and other primates in Oban lies!

WCS Project Manager training rangers how to use the Cyber Tracker

These efforts to protect Preuss's red colobus have become even more important recently. The other two places the species is found - Korup National Park and Ebo Forest in Cameroon - have come under increasing threat. The government of Cameroon recently proposed plans to convert the Ebo forest to a logging concession. There is ongoing civil unrest in northwest Cameroon, which has limited conservation activities for more than two years in Korup National Park. Conservationists are pushing against Ebo's effort, but if these plans go through, the only actively protected population of Preuss's red colobus will be those in Oban. 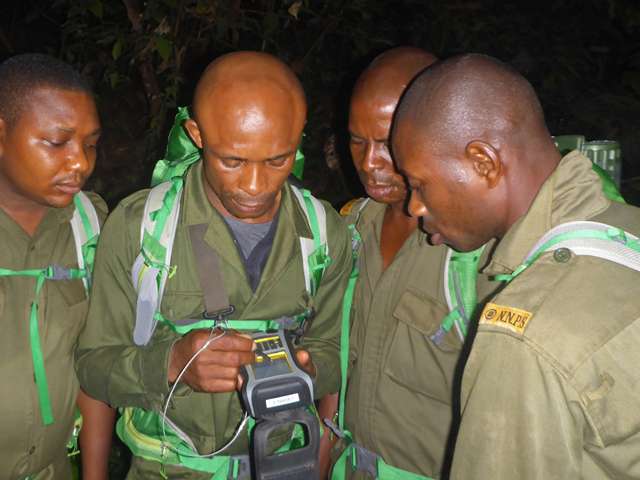 You can learn more about efforts to protect Preuss's red colobus and the concerted and coordinated range-wide conservation action plan to conserve and recover all 18 red colobus species here.