My name is Chris Goldston, and I'm an Animal Management Supervisor here at the North Carolina Zoo. While I am one of the longest-tenured employees of the current Zoo staff, my association with the Zoo goes longer even before I became an employee.

Back in the early 70s, just after the opening of the interim Zoo, where our first public animal viewing areas were located, the Zoo property was hosting a Boy Scout Jamboree. As a scout, I remember going out to find our campsite, set up our tents, then meet the rest of the campers for a larger jamboree. After that day, anything said, recorded, or printed about the Zoo was fascinating to me. I wanted to learn more about this gem that was being planted in the geographic center of our state. I always wondered as a young boy if it would be possible for me to be a part of this unique place near my hometown. 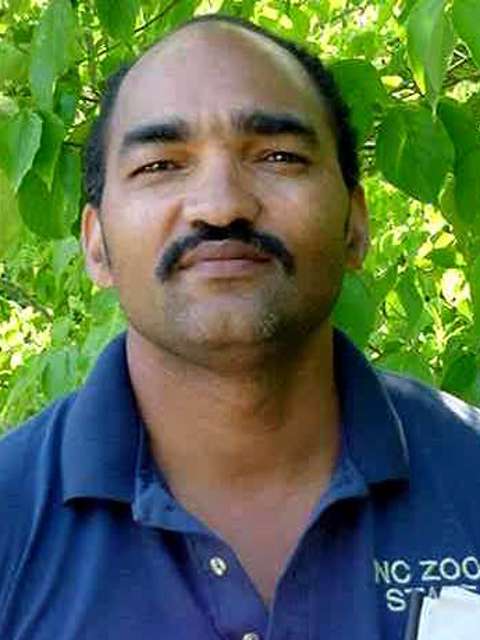 While being one of the first and longer-tenured black employees, there were other firsts before me that bear mentioning. The Zoo first employed my brother Tony Goldston to work in the exhibit design section. He helped construct the rock structures surrounding the lion habitat and the African Pavilion, where I came to work in 1983. I had completed my enlistment in the US Army, and the team needed some labor to help finish the project. Tony mentioned my name to Dwight Holland, then Curator of Exhibit Design, who offered me my first job at the Zoo. I worked in this position for approximately six months. I was then offered a full-time job with the horticulture grounds crew. On May 1st, the anniversary of my full-time employment, I remember Dwight for affording me this opportunity to work at the Zoo.

Other first African Americans joining me as employees around the park at that time were horticulture grounds tech Harold Anderson; Gisela Wiggins, then a Cat-Chimp keeper who later became and retired as Hospital Veterinary Technician and the late Doris Marie Collier, who was the first African American Animal Management Supervisor over Cat-Chimp and Zebra, Ostrich and Giraffe sections. In the late '90s early 2000s, Ms. Ellen Price and her husband George Price joined the Zoo. Ellen is still in HR, and George is now a retired Environmental Service employee. I would also like to honor Ms. Addie Luther, a former Society board member, and the late Thomas Livingston, who retired as Assistant Chief Ranger.

In the late 80s early 90s, Willie Campbell joined the Aviary team as a bird keeper and later transferred to the African Pavilion team. He was first a temporary employee. Then, he became a full-time keeper currently employed as a Gorilla/Baboon team member.

I mention these firsts because they deserve equal recognition for their contributions to the Zoo blazing the trail in our early stages of diversification.

Pictured Above: One of Chris's favorite pictures. Young Bomassa looking up at silverback, Mosuba.

Early 2021, Jodi Wiley and I requested a meeting with our senior management team to talk about Diversity, Equity, Access, and Inclusion to see what we could do to make the Zoo a more inviting place to work and to help us all understand (especially those seeking employment at the world's greatest Zoo) how we can do better and be better. As hiring managers and our fellow animal management supervisors, we noticed a lack of diversity in our applicant pools, which started discussions about what we could do about the lack of diversity. We recognized the problem and initiated discussions. This idea was fully supported, and action planning began!

We were made aware of a new initiative coming from our government-level agency, the Department of Cultural and Natural Resources, as well as our accrediting association, the Association of Zoos and Aquariums. After the initial meeting, the Zoo hired an outside agency to lead an expanded committee of Zoo staff to learn, recognize and implement strategic initiatives setting the course for future generations of Zoo staffers by establishing the pathway to be a more inclusive and welcoming organization. Inclusiveness means not a class or race of people but growing our outreach to include all backgrounds that represent the best of who we are.

We have a way to go ahead of us, but I am proud of the steps we are taking. This summer the Animal, the Wildlife Rehabilitation, and the Conservation, Education, and Research sections will all welcome students from Historical Black College and Universities (HBCU) to the Zoo as apprentices. Their apprenticeship will provide them with full emersion experiences of how zoos function, the finer details of animal care, and how global research projects are maintained with nationally recognized biologists led by Dr. Rich Bergl and his team. 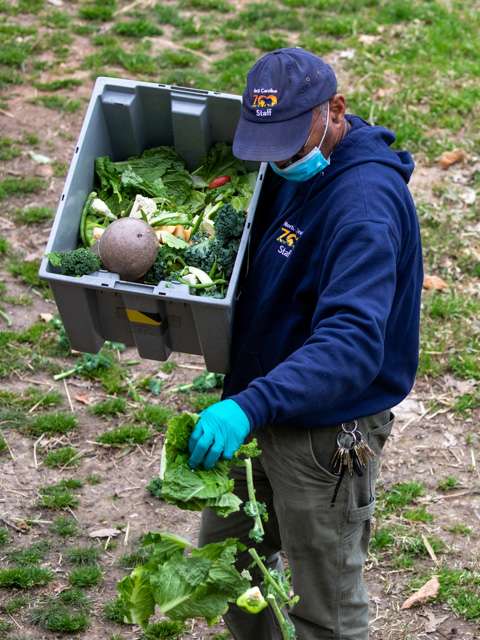 Chris putting out the gorilla's produce in their habitat

While this is a start, we know we can do better as we strive to create the same opportunity and open the doors in our other work units, ensuring everyone has equal access, especially as it relates to temporary positions and paid internships whenever possible. We have found that a lot of opportunities either don't exist or aren't readily available in communities that are typically underserved. Our goal is to be leaders in this change and make it part of our culture and who we are as an organization.

I am hopeful this will continue as an ongoing, reoccurring process as we continue making the Zoo a more welcoming and inviting place to work. It only takes one to tell one about a positive experience to begin this change process.

While it is understandable that change can be a slow-moving process and getting buy-in is sometimes an uphill climb, I am very proud of the steps we're taking in the right direction. I am proud of our senior management team, including our Executive Director Pat Simmons, for recognizing its importance and making it a priority mission of our park. 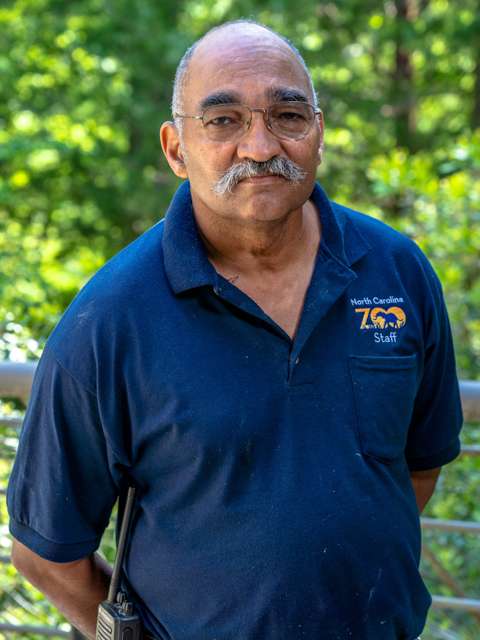 And lastly, thank you to my Zoo family for allowing me to play a role in this process and honoring my contribution to this evolving change. Together as the North Carolina Zoo nears its Golden Anniversary of 50 years in 2024, we are charting the course to be recognized as a leader in the field of Diversity, Equity, Access, and Inclusion, making our park the place you will want to be as we continue to evolve as a stronger organization in all facets. To stay the same is easy but to change is worthwhile.

I hope you will join me and come along for the ride; it will be an exciting journey.